Good preparation is half the work

Have you won a pitch? Received a commission for a public building? That’s great! But turning your creative idea into a unique piece can be a daunting task. The product developers in the TextielLab can help you translate a sketch into a tangible product – and good preparation is half the work. As a designer, what should you consider before coming to the lab? What do you need to know and do to get the most out of your time here? Designer Peter Niessen and product developer Stef Miero – two experts in the field – share their top tips.

Minding your business | Independent designers and artists are also entrepreneurs. The administration this entails is usually less popular but no less important. This section covers practical tips and tricks for managing your business – from applying for a subsidy to properly storing your work.

Inside Outside, Petra Blaisse’s interior design and landscape company, has been collaborating with the TextielLab for more than 20 years. The collaboration started in 2000 with a blackout acoustic curtain for the Dutch embassy in Berlin. Stef Miero had just joined the TextielLab, which had bought new machines to accommodate the increasing number and size of the assignments coming in. The Inside Outside design team has since returned regularly with projects that require unique, custom fabrics. A milestone was 2013’s ‘Cosmic Curtain’, a 700 m2 textile that encircles the main staircase in the OMA-designed library in Doha, Qatar. At the time, it was the largest project the lab had ever developed from start to finish. That record was broken three years ago. For the LocHal in Tilburg, Inside Outside teamed up with the lab again to co-create six curtains totalling more than

4,000 m2, which can be used to divide the gigantic former rail depot in different ways. Peter Niessen, Inside Outside’s ‘curtain designer’, has been there from the first curtain. He and Stef Miero have overcome numerous challenges together and know the do’s and don’ts of product design better than anyone. We asked them for advice for designers looking to work in the lab. This is what they said. 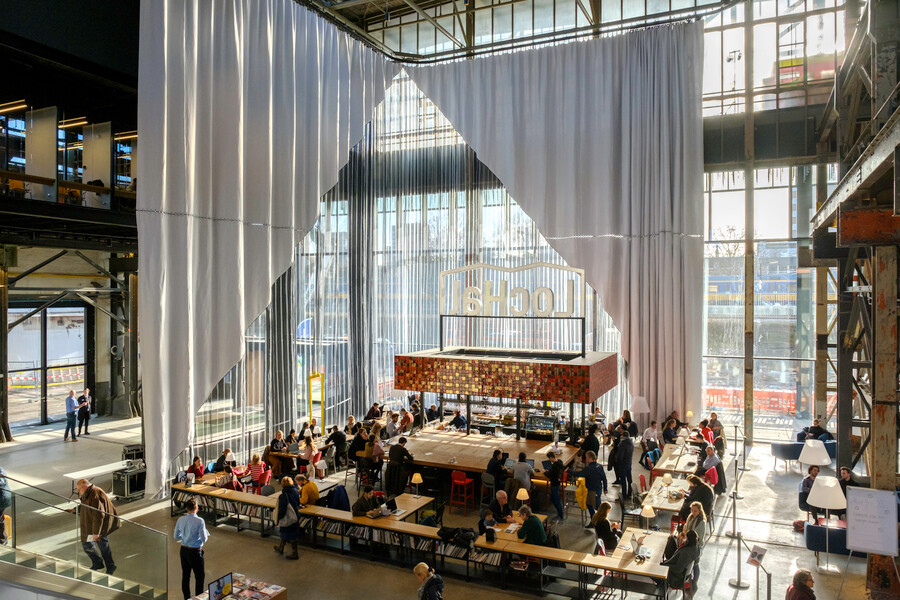 Peter: “You’re starting from scratch, creating a unique fabric that is not available anywhere else. That’s not cheap. Find out how much money and time you have. You might not be able to work in the TextielLab immediately either, so book your project in well in advance.”

Stef: “Check whether your client’s demands are realistic. A lot of people don’t realize how long it takes to develop a textile. Turning an idea into a finished fabric is a labour-intensive process. So, make sure that the textile isn’t an afterthought in the total design but is included in the budget from the start.”

Peter: “We knitted ‘Solar Curtain’, which converts sunlight into electricity, in the TextielLab. We opted for knitting because it’s best suited to incorporating conductive yarns. The curtains for Qatar and the LocHal are, like most curtains, woven. That may be a harder choice for some products.”

Stef: “We can help you make that choice. As a rule, a curtain should be static, so weaving is more obvious. Knitted fabric is much stretchier, which is a useful feature for a product you want to shape. But applications also change. In the past, sofa upholstery was always woven, but knitted fabrics are now increasingly used for this as well. In any event, it’s handy if you already have some knowledge of these techniques. As a product developer, I try not to use too much jargon, but for the LocHal fabrics, for example, we put several warps on the loom. That means you also have to add another warp beam. This, in turn, influences the colour and quality of a fabric. Are you still with me?”

Peter: “Is the product intended to reduce noise, provide sun protection or block out light? Fire safety is especially important for curtains. These standards differ across products and countries. In Italy, a curtain must still be fire-retardant after it has been washed. Does the product even need to be cleaned and how often?

Stef: “All functional and maintenance requirements influence your choices, as does the light in the building where your work will be seen. If possible, we try to visit a location before we start the development process. Also consider how the work will be hung or displayed. For example, a curtain shouldn’t be too heavy for the ceiling or other structure supporting it.”

Peter: “What I like about the TextielLab is that brainstorming is part of the process. When I was working on the LocHal curtains and thought the bottom of the fabric should be more transparent, Stef suggested splitting the warp. It was quite a hassle, but with some clever tricks we finally got a beautiful thin fabric. My advice is: tell the product developers exactly what you want, so that they can help you achieve it.”

Stef: “I’ve learned to be a good listener. I want to know what a designer and their client envision, so we can convert that vision into a textile. And we can show them things that they hadn’t thought of themselves. I mainly present possibilities. Sometimes a designer is so focused on one thing that they overlook options that could benefit the project. You can often do so much more with textiles than you think. For larger projects, I also recommend doing preliminary research together. We co-create a lot of samples and then use these to determine what the designer and client want.”

Peter: “Many clients aren’t used to assessing textile designs. Show them samples at every stage of the design and keep repeating the story behind it. That can be tiring, but it pays off and builds enthusiasm. It’s also good to involve the building’s architect, so that you can tackle any objections at an early stage. And don’t forget to mention at the outset that the design will change during the process. You never know in advance exactly where you will end up.”

Stef: “That’s what’s so great about the creative process. If you dare to play around with it, the result can be even better than you thought possible. I like to push boundaries; that’s where innovation occurs.”

Peter: “As a designer who is commissioned to make things for clients, you want to make those clients happy. You can’t avoid making compromises and concessions but keep asking yourself if you’re still behind the design. Sometimes you’ll have to say no – choose your battles. That can be difficult on your own, so ask the TextielLab to back you up when necessary.”

Stef: “These concessions might also relate to the technique used. A client doesn’t know all the ins and outs of a woven fabric, so doesn’t know why things can’t or shouldn’t be done differently. We can advise both the designer and the client objectively. Ultimately, they have to make the choices, but we can help by explaining or showing the implications of those choices.”

Peter: “Agree in advance and put down on paper who owns the copyright to the final product. This should always be the designer. But even if that’s not the case, try and get the client to agree that you can publish images of the work without having to get their permission each time.”

Stef: “We also ask that any publications about the product mention that it was developed in the TextielLab. We are just as proud of the result and want to showcase what we make here.” 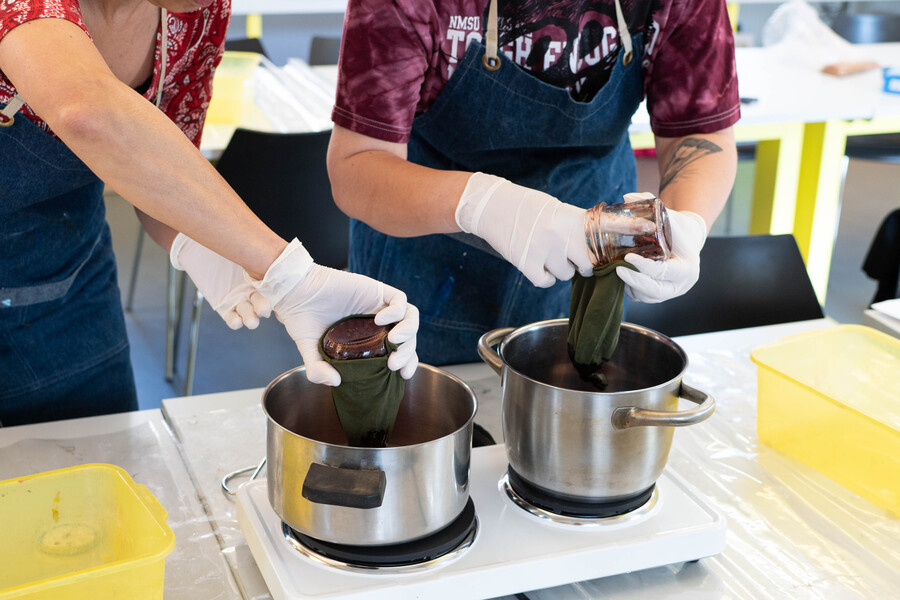 Old paint recipes for new use 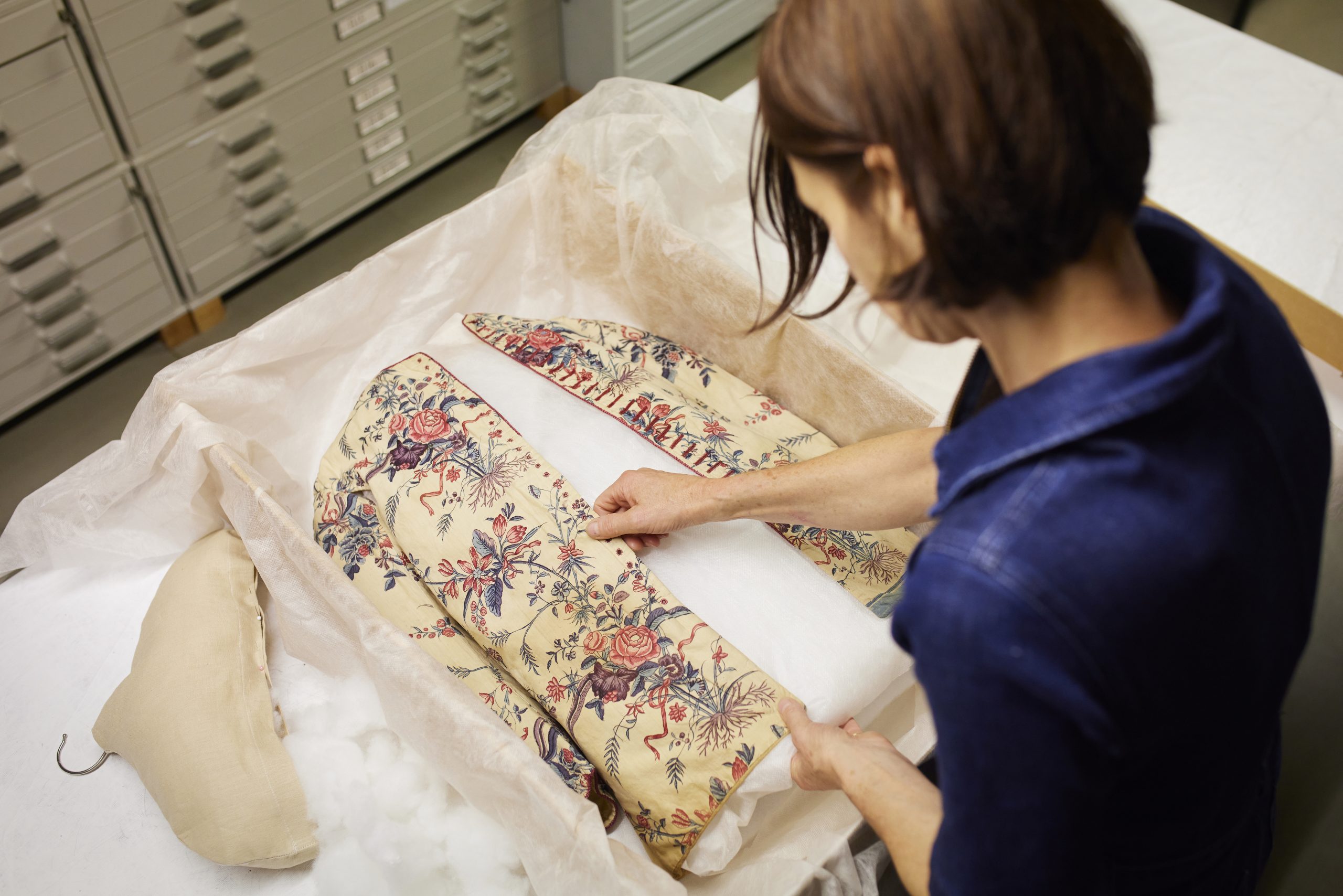 How to preserve your work 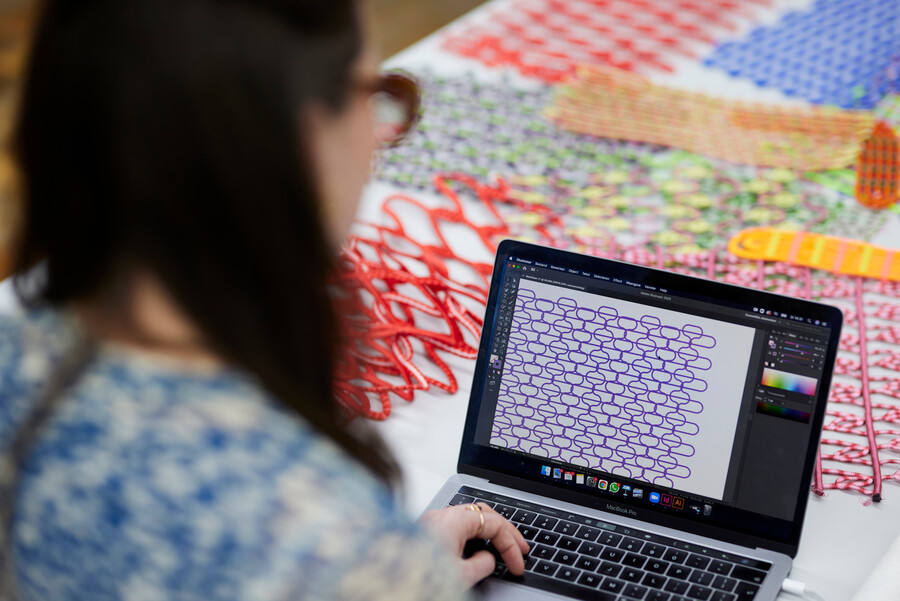 Boost your career with a subsidy