How does one make a shoe knitted to shape? Is it possible to make a load-bearing structure on a braiding machine? And how do you get a woven Venetian blind to react to sunlight? At the TextielLab, designers get together with experts to search for answers. The exhibition Secrets of Making offers a candid look into this explorative endeavour. This autumn, you can let yourself be inspired by the ins and outs of the creative process and discover the possibilities of the TextielLab.

The twelve steel shelving units look like they have come straight out of the artists and designers’ studios; you know, one of those GS3 shelving units, perched comfortably in a studio, steadily accumulating work and inspiration material? At the exhibition, the shelves are also full of work in progress: design sketches full of notes, an old book about binding techniques, spools of thread in all shapes and colours, and countless samples from the various phases of research. It makes you curious as to what has come out of it all. In Suzanne Oude Hengel’s shelves, for example, you can begin to make out the shape of a water shoe in a synthetic knit. How did that work out in the end?

Focus on the process
The exhibition does not reveal the outcome immediately; the focus lies primarily on the design and creation process. And there’s no other museum where this is as prominent as the TextielMuseum. Because designers in the TextielLab work so intensively with product developers, technical experts, yarn experts, and curators, visitors can follow the creation and design processes closely. The exhibition Secrets of Making focuses on the ‘backside’ of the pieces, which you don’t usually get to see in a museum. Especially for fellow professionals, this is often even more interesting than the end product itself. Moreover, this exhibition is also an excellent opportunity for designers that are not yet familiar with the TextielLab to explore its possibilities. 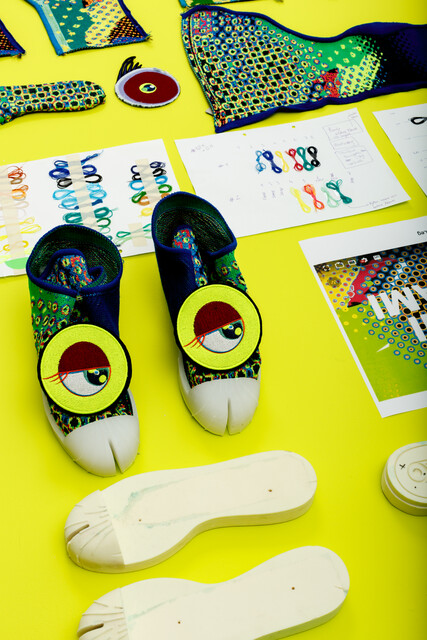 Pop-up patterns
The fourteen participants in Secrets of Making have all done design research in the TextielLab. In the lab, they were given the space to experiment with different techniques, materials and shapes. Now they get to share this process with a broad audience in the museum. It is a diverse group of product designers, fashion designers and artists. Some have worked with textiles before, others not at all. For designer duo Alissa + Nienke, for example, it was their first textile project. They worked in the lab in 2019 to develop The Sun Show: blinds for a meeting room at the Ministry of Education, Culture and Science, with a pop-up pattern that reacts to sunlight. On their shelves, you can see the paper model they brought to master weaver Stef Miero. “He explained to us exactly what the consequences of our choices would be for our final design,” says Alissa van Asseldonk. “And also how we could meet the specific requirements of our design using the weaving machine. How we could achieve the perfect convexity and rigidity, for example. This ended up being more difficult than we had initially thought, haha.”

Thread by thread
In the video, which is also on display in their shelving unit, their joint search for the right look, feel, and functionality becomes clear. At first, for example, the designers lasered the pop-up fingers out of the fabric, but they found that this made the edges too harsh. The weaving product developer called in the embroidery product developer, and with embroidered finishes, they managed to achieve a more textile-like look. You have to see it to understand it, and that’s what the exhibition does. Of course, says Alissa, she and Nienke could have sent their design to a weaving mill for execution, but then they would have undoubtedly missed this finishing step. “It would probably have been quicker, but the outcome would have been completely different. It was precisely the interaction with Stef and the machines here in the lab that was so informative. That’s also why we now work with textiles much more often. We’re interested in building up a design thread by thread.”

Spacers
As for the knitted shoes of Suzanne Oude Hengel – on her shelves, there is not a single completed shoe yet. There is, however, a fascinating series of samples that could become an element of one: a colourful collection of small hats, waffle structures, rib knits, spacers and more. In the accompanying podcast (in Dutch), she talks with product developer Sarena Huizinga about their ongoing experimentation together and progressing one step at a time. “For me it’s about making, learning and experimenting. That is a continuous process,” says Oude Hengel. The test of the water shoe is made of TPU yarn that she receives from BASF. “I am experimenting in collaboration with designer and welding expert Joris de Groot. You can melt this material together. Normally, I have to bind off the edges on a knitting machine and that takes a long time. But by welding the edges together now, that is no longer necessary. I also anticipate that there will be an aesthetic element to it. The shoe will become more beautiful, more solid. We will find out as we go along.

Surprise
In the next room, you can see that making small hats can lead to beautiful shoes. It feels like a pleasant surprise that the results of all the processes are on display there. Amongst them, several shoes knitted to shape are on display. Oude Hengel: “Ultimately, the steps I take while creating tell the story of the product. I am delighted to be able to show that here. To inspire others, and also to get feedback on the work I’m doing.”

Secrets of Making is on display at the TextielMuseum until the 8th of May, 2022. 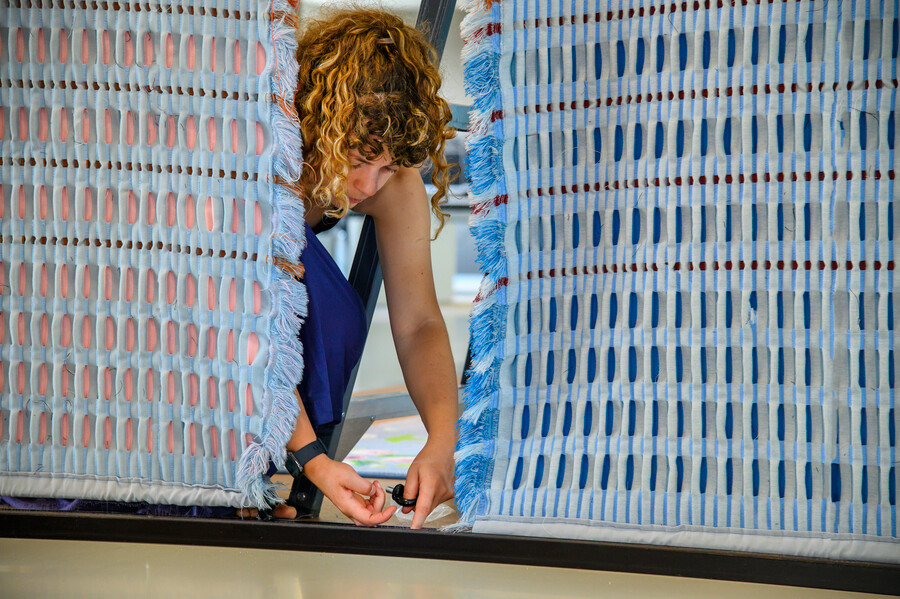 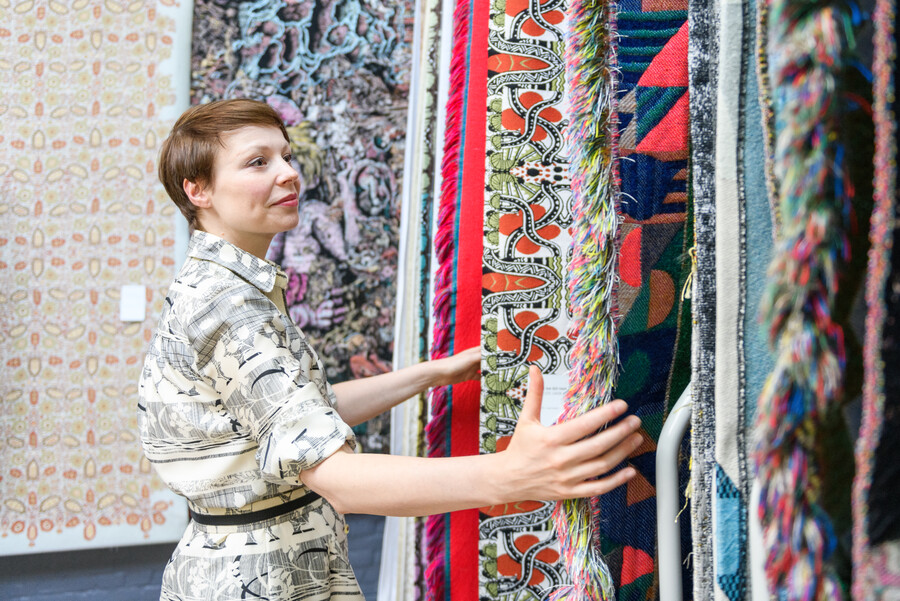 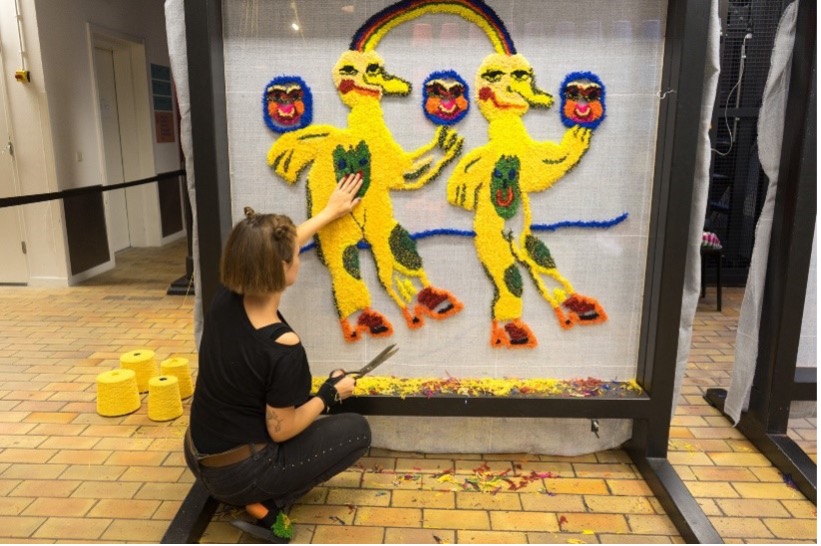 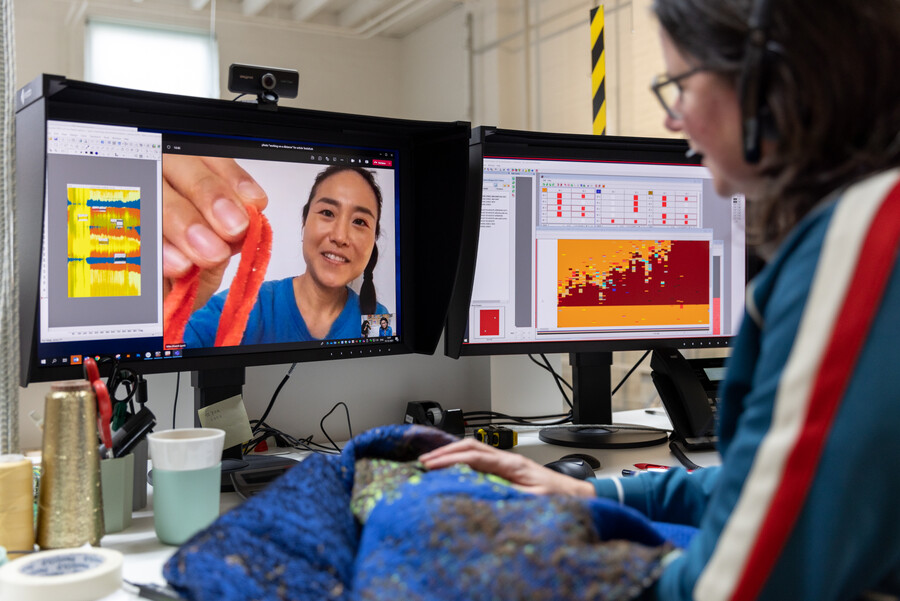 Distance designing at the TextielLab