June is an exciting month at academies. This is when up-and-coming designers and artists put the finishing touches to their final project, which they then present to critical committees of teachers and examiners. Several of these projects were made in the TextielLab, which the lab hopes will be the first of many. “We want to give young talent a boost,” says head of the lab Hebe Verstappen.

Every year, the TextielLab offers 12 final-year students at national and international academies the chance to work with a product developer for several days at a greatly reduced rate. Next year, that number will be increased to 14. But you can also apply for a place in one of the other departments, such as passementerie, tufting and embroidery. “Ideally, graduating students would have three weeks in the lab, rather than three or four days,” says Verstappen. She is working to strengthen links with various academies, so that students can start using the machines earlier and more often during their course. “We offer students hands-on experience in professional textile design. They not only learn techniques and how to experiment with them, but also how to communicate with our experts and with fabric and yarn manufacturers. In addition, the lab is a fertile meeting place: you can lay the foundation for a valuable network in the textile world.”

The benefits are mutual, Verstappen stresses. “The students who come here are highly ambitious and aren’t afraid to ask questions and try out crazy ideas. That open, curious attitude keeps us on our toes. Through the students we also gain insight into the changing role of designers and artists. And new talent is always welcome in our network.” 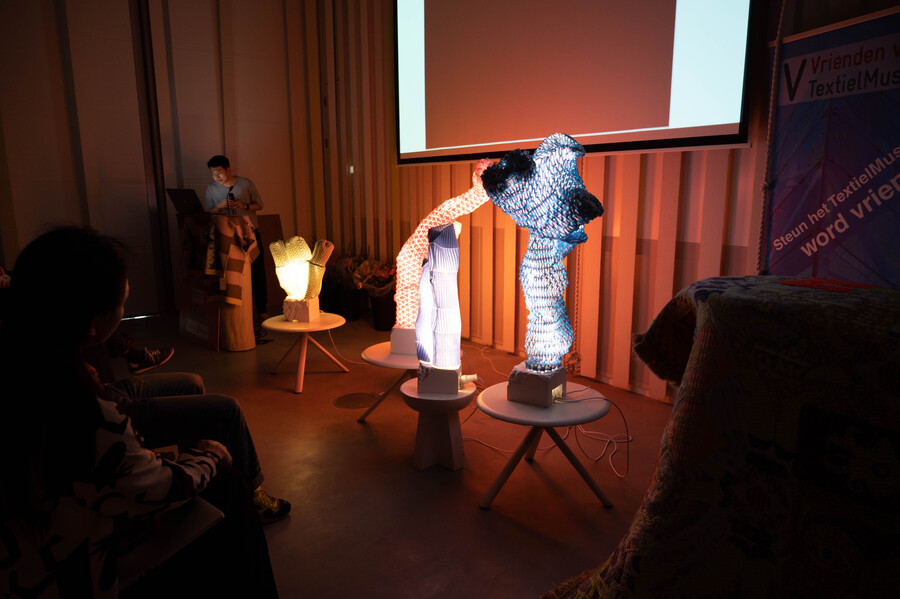 The lab can unfortunately only accommodate a small portion of the approximately 60 applications received each year. A selection committee determines which students can work with the product developers. The applicant’s motivation and the artistry of their project are key factors in the committee’s decision, but they also consider whether the project is technically feasible and contributes to the lab’s R&D programmes or the museum collection. Sangmin Oh, for example, has just graduated from the Design Academy Eindhoven with ‘Knitted Light’. This series of 3D knitted lamps makes a wonderful addition to the multi-year R&D programme related to building with textiles, with a focus on light and movement.

In an effort to fuse light and textiles, Oh worked extensively with product developer Damien Semerdjian to master monofilament. He describes this stiff nylon yarn, which is often used for fishing tackle and nets, as a “troublemaker”. But the way monofilament plays with light was so rewarding that the duo was determined to find a solution. By combining monofilament with an elastic yarn, they created beautiful self-supporting 3D textures. These are not only magical when the light is on but also continue to glow in the dark. The coral-like forms that bloomed during Oh’s days in the lab are highly evocative. He describes the lab as a “very professional playground”. He is fascinated by how a machine pushes its own limits. “I see the machine as an intriguing extension of my hands: where they stop, the machine continues,” he says.

“We offer students hands-on experience in professional textile design. They not only learn techniques and how to experiment with them, but also how to communicate with our experts and with fabric and yarn manufacturers. In addition, the lab is a fertile meeting place: you can lay the foundation for a valuable network in the textile world” – Hebe Verstappen, Head TextielLab

At the end of June, Oh’s project was awarded a prize by the Friends of the TextielMuseum, who offer young talent a platform in the museum on the annual Friends Day. Among the other students to share the limelight was Marcos Kueh, who recently graduated from the Royal Academy of Art in The Hague. It was there that Kueh, a graphic designer from Malaysian Borneo, became interested in traditional Malaysian hand weaving, which is mainly practised by poorer communities in his home country. He not only immersed himself in the craft’s technique and visual language but also its cultural-historical significance. In the TextielLab, he worked with product developer Marjan van Oeffelt to complete his eight-metre-long masterpiece. Together, they translated elements from traditional basket weaving into new weaves for the knitting machine. “Like me, Marcos is completely into weaves, so we clicked in that area,” says Van Oeffelt. “Before scaling up his designs in the lab, he carried out his own research on a TC2 hand-operated loom and did an internship at the Dutch woven label manufacturer E&E Labels. Thanks to this prior experience, we could jump straight into the deep end. We experimented a lot, not only with the weaves but also with twisted yarns.”

The result is ‘Kenyalang Circus’, a highly layered work that reflects Kueh’s search for identity. The gigantic cloth plays with the contrast between the modest traditional crafts of post-colonial Borneo and a flashy billboard that screams for attention in today’s overwhelming visual culture. Even after days of programming the design on a computer screen, Kueh was still surprised by the size of the finished textile. Fascinated by machine weaving, he immediately enrolled in the TextielLab’s Advanced Textile Program. He is delighted to have been selected and have the chance to return to the lab this autumn. “As an industrial, graphic and textile designer, this is the place to be.”

Interested in working on our weaving or knitting machines? Apply before 15 October for the opportunity to work in the lab this autumn. Read more about the application process here. For other techniques – embroidery, laser cutting or passementerie – we accept applications throughout the year. 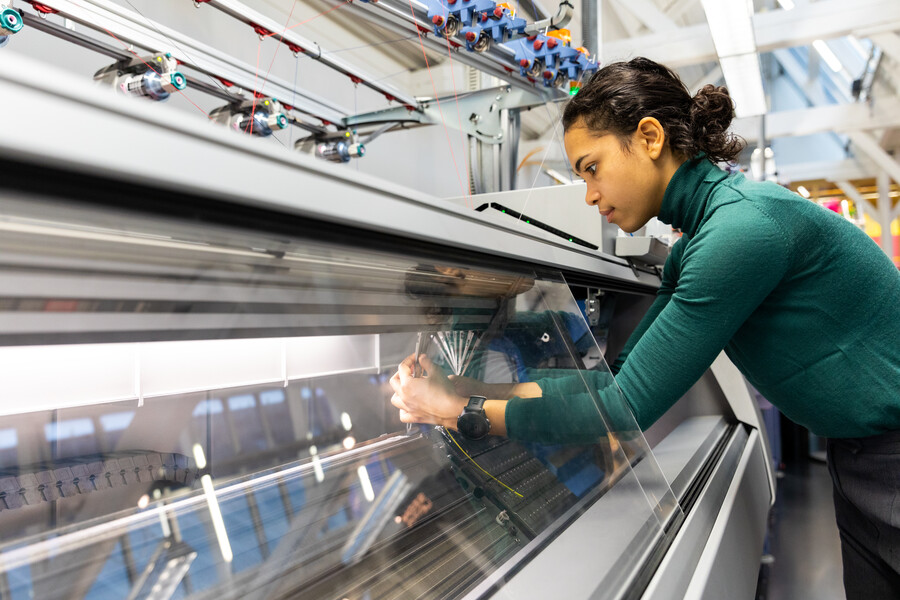 Apply for the excellence programme 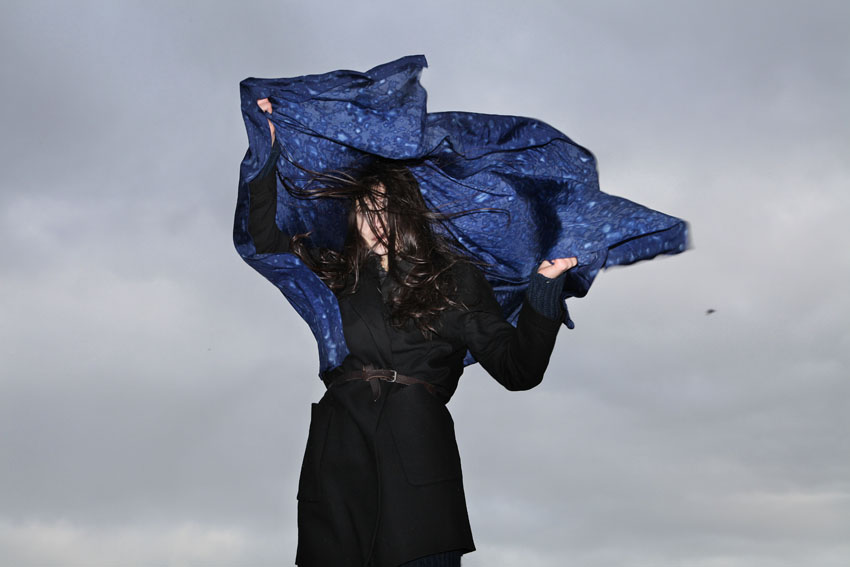 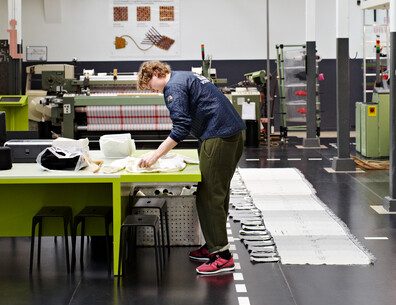